Here at The Muck-Rake, we take journalism seriously. But no good newspaper is without an opinion section, so we decided to share some of our own thoughts about one of the hottest topics around: clone-fucking. At a recent meeting, editors pitched this question to the staff: “Would you fuck your own clone? Why or why not?” The answers were so enlightening that we decided to share them with the greater Amherst community. All answers are anonymous (of course) but are real and do reflect staff members’ opinions on the subject.

END_OF_DOCUMENT_TOKEN_TO_BE_REPLACED 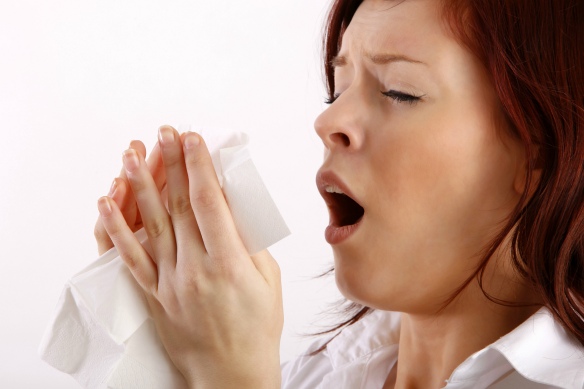 Has anyone seen my Epipen lately? That’s what you’re supposed to use to treat a stuffy nose, right? 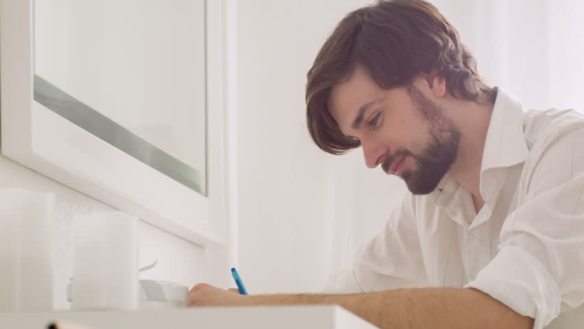 On the first day of Dartmouth Summer SAT Study Boot Camp, you and the rest of my personalized SAT Strategy Team reminded me that it truly is hard work and perseverance that matters above everything else. I was able to bring these lessons back to my studies at Washington Whitely Prep School for Fancy Boys and, thanks to you, I brought my GPA all the way up to a 3.3! 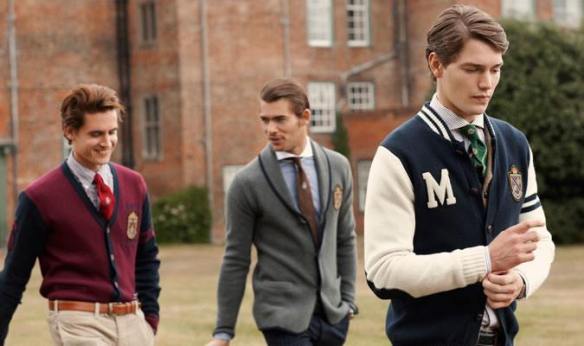 From this point forward, whenever a legacy says “Yeah, I go to a Little Ivy” what they’re really trying to say is “Yeah, my parents have a little bank account”

AMHERST, MA – For Amherst Athletics, equestrian and crew are relatively small-time affairs; they don’t fill stadiums, drive the college’s notoriety, or win championships. That is why they are at the center of what was described as the broadest college admissions fraud the U.S. Justice Department has uncovered. In its investigation, codenamed “Junior Varsity Blues,” the government focused on nine different colleges and universities who held a similar athletic reputation as Amherst, including Salve Regina University, Cal State Dominguez Hills, and ITT Technical Institute. Unlike in football and basketball, there is little widespread knowledge of or general interest in who might be good at what are seen as minor sports, so admissions officials usually have to take coaches at their word when they tell them an applicant is worthy. END_OF_DOCUMENT_TOKEN_TO_BE_REPLACED

AMHERST, MA – With the addition of the first woman in the Zumbyes, you might be thinking that times are a-changin’, that Amherst a cappella is taking a turn for the more inclusive. I’m here to tell you that isn’t true.

Hi. I’m Adramelech, former Great Chancellor of the Underworld and President of the High Council of Demons, 8th archdemon in Beelzebub’s Order of the Fly, and royal wardrobe supervisor for the devil himself. I know I sound scary, but I’ve changed! What set me on the path to righteousness was listening to our very own Christian a cappella group, Terras Irradient. The first time I heard “Shackles”, I found myself grooving in my seat, and I even shed a tear at “Worthy is the Lamb”. I immediately stopped using my evil powers to make the J Chap pews even more uncomfortable, cut off ties with my old employer, and dedicated myself to a new goal: being a member of TI.

When they posted auditions, I was so excited I accidentally let loose a plague of lice! It was my time to shine. I used to sing in the fire showers down below, and all my torture victims told me I had a good set of pipes on me (that is, before I ripped their tongues out), so I was pretty sure I’d at least make it to callbacks. I mean, they said during the freshman showcase that I didn’t have to be Christian.

So much for getting my hopes up.

I’m used to people quivering in my presence, but I thought things would be different here, especially with the institutional commitment to diversity. But when I walked into the room, the only thing I was greeted with was screaming. I guess I’m not attractive enough for you, Terras Irradient! I guess my mule head and peacock body doesn’t fit into your Western, Judeo-Christian beauty standards! Once the screeching died down and I explained myself, they (trembling) told me to sing what I had prepared. Feeling shaken but not discouraged, I continued with the traditional version of Silent Night, sung in my native 7th Circle dialect. I must’ve made an impression, because blood began to drip from Meredith’s ears and Donna’s eyes rolled back into her head. Then, they asked me about my faith. Well, of course, I told them: I’ve been serving the devil ever since I was a little baby demon. Of course I believe in Lucifer’s right to rebel against God, the punishment of sinners for all eternity, and doing general evil. They told me they’d think about it.

Well, they certainly didn’t need much time, because when the callback list was posted, my name was suspiciously missing. I got worried. Maybe they made a mistake? I know I can sing. So I messaged them on Facebook, just politely checking in about my audition, and they had the audacity to say that I wasn’t the right fit for the group! That my voice reminded them of famine! That my mule head would be disconcerting to parents during Family Weekend! Well. I certainly did not expect that from a group that claims to be inclusive. I tried to go to Title IX, but Laurie said the law didn’t cover discrimination based on demon status, and there was nothing she could do for me.

I am disappointed in the Amherst community, which is why I want my story to be heard. It’s great that the Zumbyes feel like they can take this step forward into gender inclusivity, but we can’t call ourselves an inclusive community until all members are respected, loved, and appreciated for what they uniquely bring to campus. So what if what I bring is abject terror, plague, and Val noodle bar? I am a worthwhile member of this school and deserve to be treated as such. Hail Satan! Tusks up!

AMHERST, MA – When Chris from Grab N’ Go heard that an automatic card swiper was going to replace him and help decrease line congestion, he challenged it to a swipe off to the death. Talk about taking a stand!

“I’d never heard anything like it. I was in Converse when suddenly shouts of ‘Rock on, dude,’ and ‘Have an incredible lunch, bro,’ deafened everyone and shattered the windows. I had to go see what was going on” said Chuntley Hunt ‘20, star lacrosse player and inbound summer analyst at very cool investment bank according to his LinkedIn.

But he wasn’t all bark and no bite, according to other Muck-Rake sources. “He had two cards spinning in the air on his right, and was swiping a third one with his left hand. I’ve never seen anything like it. It’s like he was the Austin Sarat of swiping you in, but not an asshole” said Tom Gomez ‘21.

In order to determine if Chris really could beat the machine, President Martin encouraged students to get back in line as soon as they got their food, saying “There can only be one! Forget the slop that you shovel into your mouth every day! This is bigger than you, this is about HONOR, about POWER, about TRUTH,” as thunder crashed throughout the campus center.

After flipping and swiping 3000 cards and emitting several hundred cold, robotic variations of “Enjoy your lunch, dude,” the machine finally sputtered and died, resulting in an explosion that destroyed most of the new Schwemm’s pub.

Chris stood victorious amidst the rubble, his hands blistered from swiping an incredible 3001 cards. He couldn’t enjoy his victory for long however, because the second the relief of victory washed over him, he collapsed to the ground and his heart exploded. As he lay dying, he triumphantly lifted his arm and let out one last “Rock on, dude”.

Wow! Rock on to you too, Chris!

AMHERST, MA – A week long Muckrake investigation culminated in the discovery that it is, indeed, hot as fuck. Additionally, due to the truly breathtaking number of fans in the Moore windows, the building has moved nearly 4 inches off its foundation. The Muckrake predicts that it will take flight within the next 24 hours if just 2 more fans are added. Many members of the Amherst community are dismayed about the heat, for differing reasons. “The heat is really annoying,” said Bruntley Gantchee ‘21. “On the one hand, it’s sunny, and sunny equals outdoor beer pong. But on the other hand, it’s hot, so if I play, I’ll totally sweat through my vintage Vince Carter Raptors jersey.”

Josh Meyers ‘20, an environmental studies major, had some other thoughts: “This heat is incredibly dangerous! In fact, it’s actually the hottest it’s been in a geologically significant time span and it’s all because–” (This quote was all our reporter heard before they fell asleep with their eyes open, but we can report that Mr. Meyers was still talking about carbon footprints when they awoke 40 minutes later.)

Some Amherst College community members, however, were not so concerned with the heatwave. “It’s not even that hot! It was way hotter in Bangkok.” said Ellen Rutlege ‘19, who recently studied abroad in Thailand and has neglected to shut up about it. “It’s just a little heatwave, nothing we can’t manage,” said Professor Sarat, as he sat in one of his three heavily air-conditioned offices and breathed fresh air imported from his summertime chalet in the Slovenian Alps (provided for him by the College, of course.) 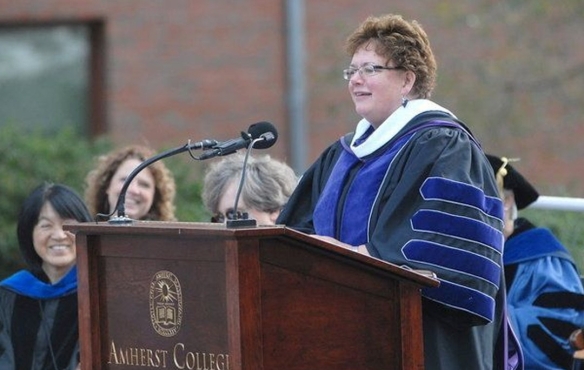 AMHERST, MA – “You’ll know when we hand you your diploma, because it’ll have a big fucking smiley sticker where my signature should be,” said President Martin at the President’s Welcome for Students, Families & Guests on last Tuesday. According to the Office of Admissions, 491 students were enrolled to the Class of 2022 – 492 if you count the doofus that got by because they thought it’d be funny.

This revelation came as a shock to many students, especially those insecure enough to worry that they might be the dumb idiot. “I know I’m not a legacy kid, but it wouldn’t be me, right?” asked Ronald McCormack ’22 nervously. “When I studied clowning, I thought it would add to my portfolio,” he added. Others have taken the high road, including Jesse Steves ’22, saying, “Look, even if I’m the joke admission, at the end of the four years, they can’t take away the knowledge I’ve gained at the school. Especially the knowledge that one of my classmates only got in because their application was dumb enough to give the admissions team a big hoot.”

“We welcome all kinds of people to Amherst,” continues President Martin in her address, “but, again, I just want to give a huge, warm welcome to the jester who doesn’t belong.”

The Amherst Muck-Rake
Blog at WordPress.com.