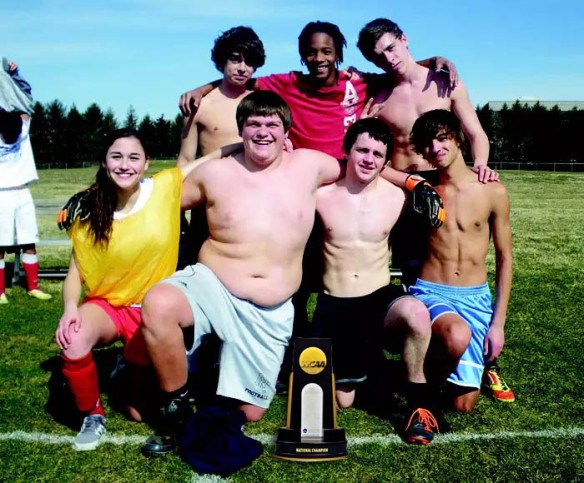 Amherst, MA – In what can only be described as the crowning achievement in Amherst athletics’ history, our intramural soccer team has captured our first ever Pioneer Valley Regional Tournament title, but nobody showed up to the game. What gives, Amherst? In a true underdog story, our team defied all odds after our relatively low seed in the bracket behind last year’s final four teams, whose games are always well-attended: The University of Massachusetts “Crossett Crashers,” The Home Depot “Hammer Heads,” The Glazed “Creampies,” and the Lord Jeffery Inn “Traditionalists.”

After progressing through the Round-Robin style tournament, we found ourselves in the championship game against the “Crossett Crashers”, as the other teams were constricted by regular working hours. We struggled at first, but the game hit a huge turning point when my buddies Nicky Packer-Loon and Jackie Longhard got out of lab early and were able to play in the second half of the game. But not everyone has lab; at least some of you should have been able to make it to our Saturday game.

If anyone had bothered to come, it would’ve been amazing to watch: the game was neck and neck with a score of 0-0 going into the last five minutes of play, which are determined when it gets too dark out to really see the ball that good. Despite the lack of any support from our own school, dog walkers and children on the playground alike were in awe as the “Crossett Crashers” scored a goal on itself, securing the victory for us, Amherst’s finest soccer players.

I even had to conduct the post-game interviews myself, because for some reason all the commentators were busy. When I asked who contributed most to the game winning goal, Brianna Ciambueno, our center winger, said that Tommy Bowl, our shortstop, should get the credit, but Tommy said that Brianna did most of the work. I’m pretty sure that this dialogue occurred because Tommy and Brianna most definitely have a thing.

In lieu of preparing for classes on Sunday night, we had a post-game pizza party to celebrate the momentous occasion, in our primary practice facility, the Freshman Quad. Alas, it was completely empty. Amherst, it’s time we stepped up our school spirit.

Ryan Cementarzy ’16 is a regular contributor to The Amherst Muck-Rake, and his kick is said to shake mountains.