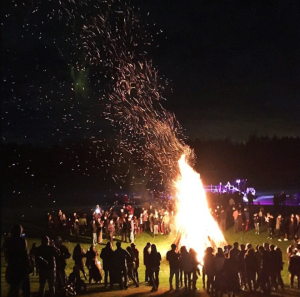 AMHERST, MA – In a tragedy that could not have been foreseen by anyone that didn’t attend last year’s bonfire, four first years have been found dead in the aftermath of a stampede for homecoming 2015 T-shirts.

The T-shirts, which feature a caricature of a dead bird, the mascot of Wesleyan College, have been reported as “gorgeous”, “worth dying for”, and “a little worse than last year’s but hey, free T-shirt, am I right?”

The stampede, which began approximately between the words “free” and “T-Shirt” when the MC’s of the event yelled “Who wants a free T-Shirt?” at the audience, consisted mainly of first years whose excitement for the homecoming bonfire had never been dulled by the knowledge of what a homecoming bonfire was like.

“It was a massacre,”, Jakob Pfeizer ’17 told the Muck-Rake. “They were biting, kicking at each other. I heard one yell his SAT score to establish dominance. Another was strangled with a lanyard, and you could see ‘Amherst College Orientation’ imprinted into his throat.”

“The horror. The horror,” he added.

The death toll is expected only to increase over the homecoming weekend, and the ceremonial sacrifice of seven virgins to the NESCAC gods during the bonfire will only excacerbate those numbers, inside sources report. The administration only hopes that the sacrifices made during this homecoming will bring bountiful alumni donation harvests.