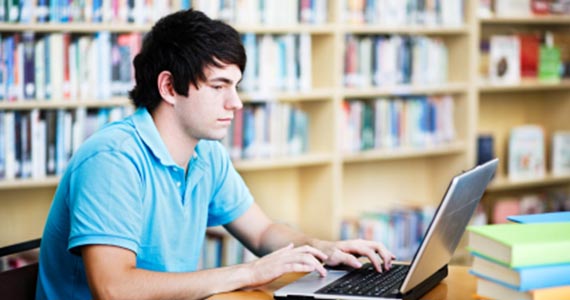 “You just need to keep on plugging, and if you get enough applications out there, sooner or later, somebody’s bound to accept you. I mean—how could they not? Right?” He lets out a loud laugh. “Yeah, no, I’m totally fine. I’m not concerned at all. Not at all. I’m in a very good place.”

Faber hits the refresh button on the Quest search page. A librarian approaches and tells him Frost is closing in two minutes. Faber does not seem to register the interaction.

“I’ve met with the peer career advisors a bunch of times,” he continues. “It took eight or nine tries to get my résumé approved, but it’s really solid now. I mean, I’ve got such a tight bullet-point game going. And the indentations—the indentations? Forget about it! Mine might as well be the career center’s example résumé.”

A look of concern shoots across Faber’s face. “Shit, that reminds me!” he exclaims. “Do I have a career center meeting right now?” He frantically checks his phone. “Oh, oh right,” he says with relief. “It’s Saturday…and nighttime.”

An economics major, Arnold began applying to finance and investment banking internships in January. By April, he had received zero offers, and thus began expanding his search.

“Right now I’m looking at a few different options,” he explains. “There’s a temporary manager position at a South Dakota truck stop, there’s an oyster fishing apprenticeship off the Delaware coast and there’s a really cool opportunity to be a human test subject for a biomedical firm in Las Vegas. Could you imagine? Vegas! It would be great. Any of them would be great. And even though all my friends already have jobs, I know I’ll get one. You just have to stay confident, and I am very confident. Very, very confident. So confident.”

As of the publication of this article, Faber has been offered zero positions.