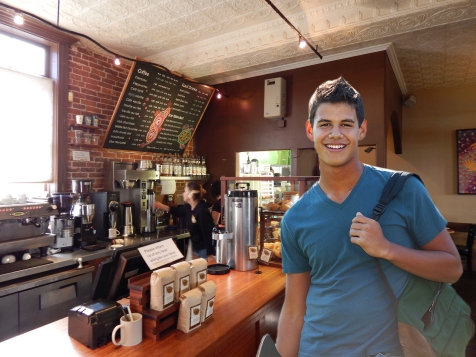 It was finals week last semester, so Frost was super packed and I wanted to work somewhere else. Amherst Coffee was even more packed than Frost and Starbucks is trashy, so I settled on Rao’s. I ordered a Chai latte and then couldn’t find an open table, so I asked some guy who was sitting at a big table by himself if I could sit at the other end of it. Literally as far away from him as I could possibly be while still being “at” the table.

It was magical. I had been messing around on Facebook as a warm-up before I started working, and one of the profiles I was checking out was this super cute senior named Rachel Black. Sure enough, five minutes later, I looked up and there she was in the flesh! Then she said, “Do you mind if I sit here?” It felt like something out of a movie.

I was too nervous to say anything, so I just nodded. When she sat down and pulled out her laptop, I noticed that she had a Macbook too! I thought about how to bring up how much we had in common, then I started running through how an entire conversation between us would probably go. It went super well!

All that thinking got me really excited and I started to sweat a bit. That made me self-conscious, which made me nervous, which made me sweat even more. It was a little embarrassing. I still hadn’t said anything to her, but “Lose Yourself” by Eminem had just come on Shuffle so I felt pretty inspired. It was pretty loud in Rao’s so I kind of had to shout to make sure she could hear me. I said, “Do you have any towels?” She must have had an emergency, because she packed up pretty quickly and left without saying anything. Anyway, I’m super excited for our second date!