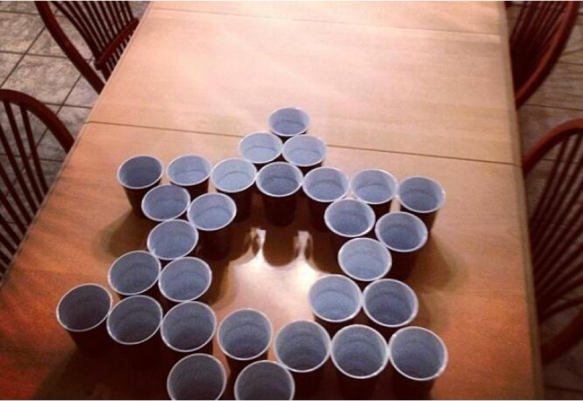 The lights in the common room are dim, as 90’s pop hits resonate from speakers at a (quite reasonable) 40% volume. Drops and splotches of keystone speckle the floor surrounding a central table. There, densely huddled around the table’s edge, a dozen or so students, their expressions stern, play yet another game of slap-cup. Few speak, and when they do so, it is in hushed tones. Slap, slap, slap go the red solo cups. The game is over, the bitch cup solemnly had, and another game set up. Hitchcock Hannukkah is here again.

“It all started on one frosty December’s eve,” regales Jerry Tao, ’15E, one of the houses most elderly members. “I wasn’t there, but my buddy Mike was. Anyway, him and a bunch of his friends wanted to play slap-cup to blow off some steam before finals. But, alas, there was only enough beer to last for one game. How could the party go on? But then, a miracle happened. The beer didn’t last just one game. It lasted eight games. Eight! not six, not seven! Eight!”

Tao pauses, a single tear rolling slowly down his cheek.

“And now, to celebrate–to celebrate, but also to remember– that glorious night, we play slapcup every year, eight nights in a row. We play one game the first night, two games the second, and so on, until the eighth night,” Tao says, nodding solemnly.

“I converted last year,” says Erica Fields, ’16. “I was just so fed up with the commercialism of Crossett Christmas. Everything got so crazy last time – it just lost touch with its roots. Cops and broken windows and fire alarms? That’s not what the holidays should be about. They should be about friends. Friends and dangerous amounts of alcohol.”

Fields walks outside, as if to remind herself for a moment of the cold world beyond Hitchcock Hanukkah. She sighs. “The one thing that gives me hope is that we are not alone in resisting Crossett Christmas.” She whispers, “Somewhere in the night, Coolidge Kwanzaa rages on.”