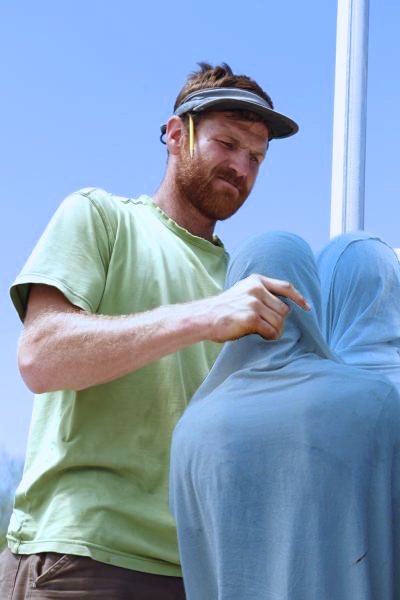 Amherst, MA – Explaining that the explosion in population of students hailing from California in recent years has brought unique challenges, Dean of Students Alex Vasquez unveiled a new initiative Thursday morning to address problems caused by the temperate climate of the college.

“While the college has welcomed the geographic diversity and new perspectives these students provide, last year we lost a significant portion of our Southern California students due to sub-freezing temperatures,” relayed Vasquez, “and we’d rather not see that happen again. So this year, I thought to myself, ‘who’s good at protecting things from frost?’ And of course, farmer Pete came to mind.”

“Oranges have the same problem,” explained Book & Plow “Farmer” Pete McLean. “At temperatures below freezing, they just can’t survive. This So-Cal crop, they’re not built for this environment—they’re an imported species. They have to be protected from the weather until they’re ready to be shipped back home for winter break.”

McLean went on to explain that in the citrus industry, farmers spray their crops with water to insulate them. “I’m doing the same thing, except, instead of using water, I’m spraying them with kombucha. So far, it’s been extremely effective.”

As for the students staying on campus over interterm, McLean has already started preparations. “For them,” McLean goes on, “we’ll have to take more long-term preservative measures. They’ll be wrapped in protective tarp for several days at a time, with plenty of human contact—I plan on talking to each of them for at least five minutes a day. In the dead of winter, I’ll remind them what the sun is like. Maybe I’ll sing Beach Boys songs to them. Anything to keep them from getting too depressed and withering.”

If proven effective over the entirety of the winter, McLean plans to expand the program next year to include Caribbean and Floridian students.