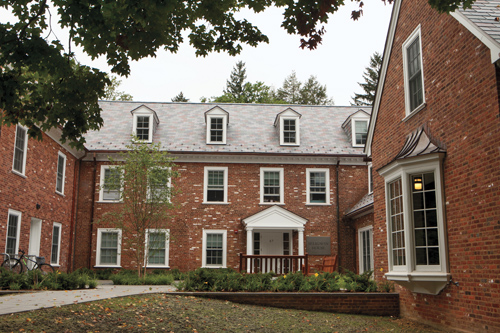 CONVERSE HALL, Amherst, MA — Representatives today responded to backlash coming in the wake of the recent creation of a West African Theme House, to take up the entirety of Seligman Dormitory.

“We felt that embracing the rich culture of the West African people was long overdue. Charles Drew House is a crucial part of residential life at Amherst, but it falls short of our goal of providing theme housing to students from ALL walks of life,” a Residential Life spokesperson told reporters.

The decision ends the 1-year run of the Chinese-Japanese Language House at Amherst’s most recently renovated dorm.

“There are numerous advantages to this change. Seligman’s security is unparalleled, and as the dorm most distant from campus, it offers unparalleled isolation. Not to mention it’s the closest to the UMass Health Center, making it perfect for establishing a tight-knit, closely monitored theme house community.”

ResLife added that creating the theme house shortly after growing Ebola cases exceeded 10,000 in West Africa, with disparate infections occurring in the U.S., was purely coincidental, and not a crass public health ploy, as student organizations have alleged.

“I want to stress that this is NOT some kind of racial quarantine. In fact, I encourage anyone who is interested in West Africa, or who has visited the region within the last 4-6 months, to apply.”

ResLife concluded by saying that plans are also in the works to open the second floor of Seligman to students from Atlanta, “particularly those who live near or around the CDC.”