Chief Amherst Correspondent reporting from on the scene with BIOL-434 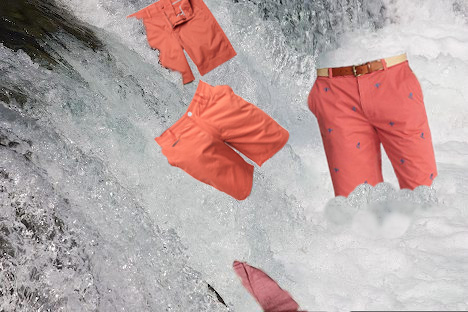 “Aren’t they just so majestic?” whispers Professor Ethan Temeles. Two dozen students stand on the shores of the Connecticut river, in awe of the thousands of salmon-colored shorts darting and splashing through the currents.

Dennis Shenberg ’15, who is writing his senior thesis on the shorts’ migratory patterns, explained that he has been studying the various species of  salmonum bracis for years. “Following the mating season, the various families of shorts, known as ‘frats,’ congregate here to begin their great migration.”

A pair of Nantucket Reds dives in a great arc across the water’s surface, landing with a splash. “The majority will find their way to South America, traveling some 8,000 miles.” Shenberg pauses. “But some fraternities will not make it,” he adds softly.

“The shorts will then restart their yearly cycle, gracing the legs of Peruvian, Chilean and Bolivian prepsters,” says Temeles, nodding reverently. “They are known to the locals of those countries as Pantalones de salmon.”

A majestic fraternity of Dark Pink lacostes gathers at the bank of the river, signaling to the others that the school is ready to take flight.

“Those of you who are interested”, Temeles quietly adds, “should join me in a few weeks to watch the Bean Boots arrive.”