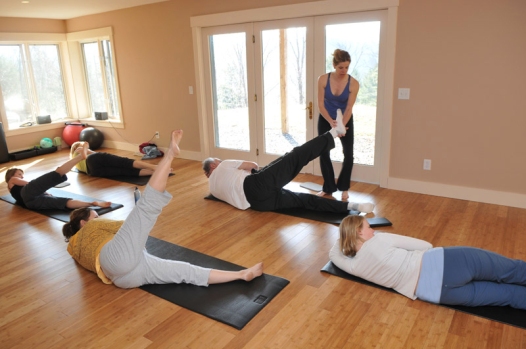 “The harms associated with this program are myriad,” Ellison wrote in an editorial in the college’s student newspaper, The Climax.  ”Pilates is inherently exclusive to the physical elite, cruelly slapping down those incapable of abdominal centering, muscular precision, concentration, and breathing.”

Ellison tied the drop-in Pilates team to “the late-stage capitalist consumerism that is Lululemon stretch-pants” and argued that “its focus on fitness promotes machismo body images and the brutal hazing that always happens in sports.”

Many students expressed support for the professor in the comments section of his online editorial, saying serious questions about the sport’s impact on Hampshire society were long overdue.  ”Thank you for saying what all of us have known for years,” wrote one self-described “’12 Alum.”  ”With their exclusive gatherings, groomed facial hair, and self-esteem, the Pilates team has always undermined the values this college was built upon.  When I accepted Hampshire, I didn’t mean to join a professional sports team with a college on the side.”

Controversy over the Pilates program dates back to last October, when first-year Fiona Obeia reported feeling “winded and sore” after an open-air Pilates class outside Hampshire’s Eric Carle Museum of Picture Book Art.  ”My legs were on fire,” Obeia later reported to the college’s Recreational Resistance Collective, which opposes organized physical activity.  ”But they said it’s supposed to feel like that.”

Ellison acknowledged that he would “certainly rankle the cabal of rich alumni donors,” but said that it was “time for sober thinking about the challenges we face.”