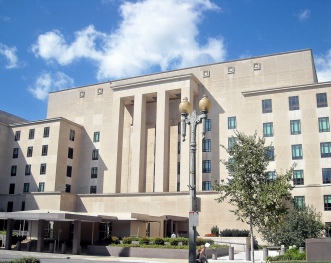 Washington, D.C. – The U.S. Department of State announced Monday that it was awarding Amherst College alumnus Ezra Van Negri (’12) the Kissinger Medal of Peace for resolving the latest Israeli-Palestinian turmoil in his senior economics thesis, Strategic Behavior in the Israeli-Palestinian Conflict.

“We had not thought to apply a game-theory framework to a political event, particularly a situation as complex as the Israel-Palestine crisis,” said an appreciative Secretary of State Hilary Rodham Clinton in the written statement.  “Van Negri’s groundbreaking research showed to all sides that a peace agreement was in their best interests.”

Van Negri’s thesis, which adapts a model developed by fellow Amherst alumnus Ethan Bueno de Mesquita (’05), explains the interaction between a government and the moderate and extremist factions of a terrorist dissident group.  According to Van Negri, a peace deal requires both a moderate, left-wing Israeli leadership, generally understood to imply the Labour Party, and a strong Palestinian moderate faction, believed by geopolitical analysts to imply the Fatah movement.  Extremist groups make the peace agreements less likely to occur.  Said a still-impressed Clinton, “We had never thought to bring to the bargaining table moderate factions of these groups.  Thank you, Ezra, for enlightening us.”