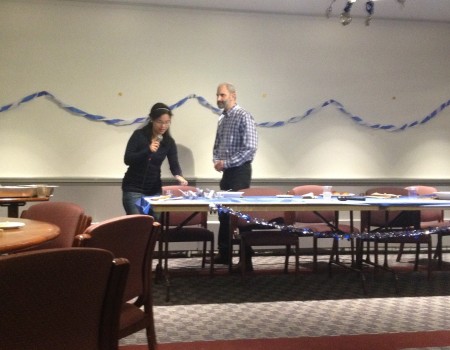 Wiener’s solemn and well-attended maturation ceremony at Congregation Emanu-El, right on the Park, and subsequent Sex in the City-themed gala in her honor have together remained the gold standard of Greater New York Jewish social events since at least seventh grade.

Observed Jeremy Schecter ’16, “Between latkes, Gad’s, and much, much more, HanukahPalooza just had the energy and entertainment to pull itself ahead of even Julie’s bat mitzvah,” hosted by Sarah Jessica Parker and featuring musical performances by the Eminem companion band D12, which was popular then.

Rebecca Rosen-Bikoff ’14 added that ChanukaPalooza’s elegant Lewis-Sebring location brought back memories of Wiener’s own exclusive celebration, which was held at Cipriani, though not the one in Midtown.

Despite the party’s dethronement as the leading social gathering in Northeast Jewish history, attendees stressed that the bat mitzvah remained an almost flawless celebration, even after Wiener called her mother a bitch for changing the party’s decorative theme without her approval.  The event was made all the more meaningful by the presence of Wiener’s father, who was granted temporary leave from his family’s apartment to attend the celebration by the U.S. District Court.

Attendees drew particular attention to the HannukkaPalooza latke bar, which several noted recalled some of the most memorable aspects of Wiener’s fete, including the “Bobbing for Apples” iPod give-away, the Shirley Temple bar with real Belvedere shots, and the ever-popular fountain of lox.